The Inner Life of Black Holes: The Duality of Scale

The Inner Life of Black Holes
The Duality of Scale

The macrocosmic universe and the quantum subatomic world mirror one another in unexpected ways, and we humans inhabit the nexus between the cosmic and the subatomic scale. Both worlds are invisible to our naked eye. Gargantuan black holes inhabit the center of every galaxy, including our Milky Way, swallowing everything in their path.  Black holes might also exist at quantum, subatomic scales as well; experimental physicists at CERN are currently searching for their existence.

Gravity so strong that not even a beam of light can escape – we are mesmerized by the mysteries of the immense objects known as black holes. While we cannot observe them directly, we infer their existence through the gravitational pull they exert on nearby objects. Their formation from dying stars more massive than our Sun is an inescapable conclusion of Einstein’s theory of gravity.

Absent direct experience of black holes, we can nevertheless rely on well-tested scientific ideas such as Einstein’s relativity and Schrodinger’s quantum physics to predict many of their properties. The marriage of these two circles of ideas led Stephen Hawking to conclude that a black hole’s event horizon – the point of no return ­– emits a subtle quantum glow. Black holes are not completely black after all, but slowly evaporate through the emission of this `Hawking radiation’.

More speculative ideas such as string theory are beginning to provide a conceptual window into the inner life of a black hole. The violent events spawned by the crushing force of gravity at the black hole’s core may access new dimensions of space and exotic objects inhabiting them, which are otherwise hidden from experience. These objects in our cosmos provide fertile ground for generating new concepts of space, time and matter. But how can we visualize this exotic realm? This question provides an impetus for artists and scientists to collaborate.

Throughout history, artists have both influenced and been inspired by science — whether it was Leonardo Da Vinci or Albrecht Durer in centuries past, drawing their way into the discovery of human anatomy, the heavens, and new technology; or Joseph Cornell in modern times deriving inspiration from astronomy. Boundaries between disciplines migrate over time, and in the overlaps lay new perspectives on the world we inhabit.

Contemporary artists such as Yoyoi Kusama and Chiharu Shiota experiment with environmental installations that explore the idea of infinite space. Other artists such as Richard Serra and Eva Hesse were influenced by “Minimalism”, exploring ideas of Phenomenology (the structure of experience and consciousness). Tony Smith’s quote: “There is no way you can frame it, you just have to experience it” sums up the subjective experience of art rooted in time unfolding and the crucial element of a viewer being engulfed in the environment. The key was to experience first hand the phenomena around you.

Physicist Emil Martinec and Artist Julie Rotblatt Amrany have collaborated on creating an art installation that will transport the viewer into the realm of the black hole, engaging all of his/her senses by losing a sense of self. It is a conceptual experience, which integrates architectural fabric, light, video, projection, sensory motion and sound devices as the viewer walks through the installation.

The viewer’s motion in front of the black hole installation causes the projection of light and images to undulate with their movements. A vortex depicts the swirl of matter being drawn into the black hole. A key property of the quantum theory of black holes posits that the information about a black hole’s internal state is coded in a subtle way on its event horizon. Thus, as the viewer walks through a portal into the next portion of the exhibit depicting the black hole interior, their image is recorded and projected back out onto a floating disk just outside the opening. This image is distorted and pixelated, representing the scrambling of information by the black hole.

The structure of the space representing the black hole interior becomes fragmented and swirls around the viewer. The structure draws you in, evoking the inability of light to escape. Fiber optics hang from above forming a vibrating network of strings. This network of membranes and strings represent the exotic multidimensional objects that string theory predicts are created by the violent collisions that occur in the core of the black hole. Leaving the singularity behind, one is led to the final space of the installation, revealing projections of outgoing ripples and mathematical calculations denoting the evaporation of the black hole through quantum processes. Sound is also integrated into the enclosure as a low rumble from the aboriginal didgeridoo reminds us of our primordial beginning.

Ideas about black holes, gravity, quanta and string theory are presented, though there is ample room for the participant to interpret, wonder and ponder the mysteries of our universe. 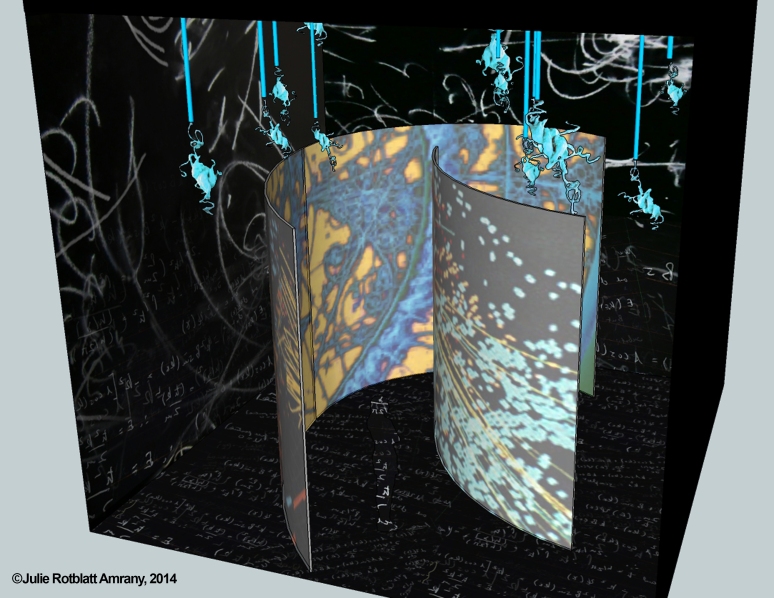 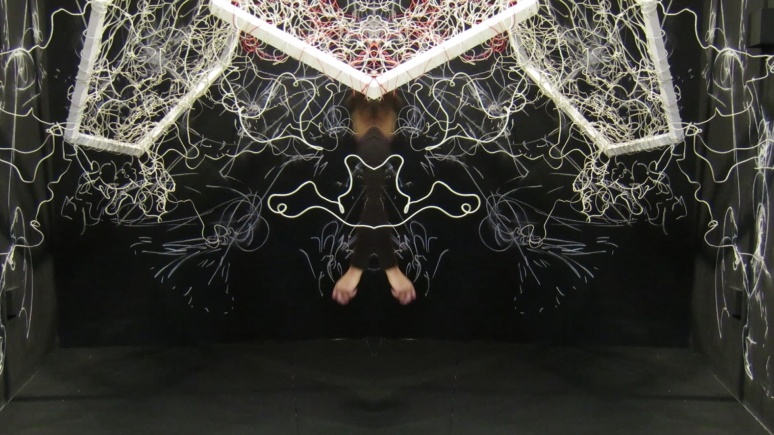 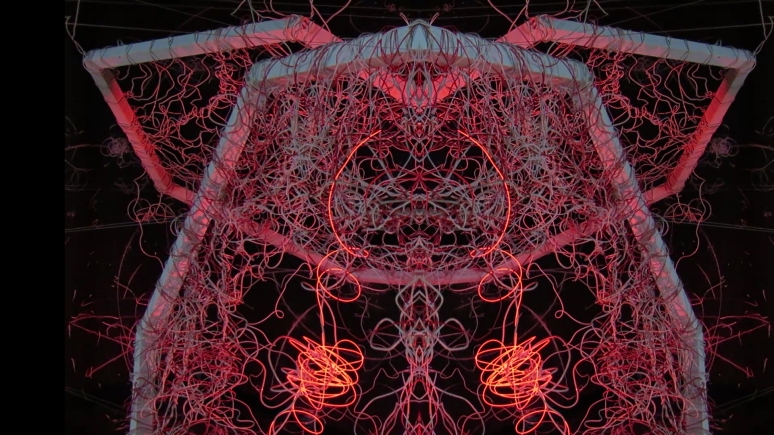